During the last year, boxer Floyd Mayweather grossed more than 30 times the average earnings of the CEOs of America’s 500 biggest companies. That’s right, he got US$300m for just 120 minutes in the ring, making the average CEO’s paycheck of $10.5M (including exercised stock options and vested stock awards) look almost small by comparison. Most people would consider Mayweather’s earnings to be excessive (especially boxing fans unable to afford $6,000 for a ringside seat to watch a fight in Las Vegas). And yet, CEOs find themselves more in the spotlight when it comes to popular criticism around compensation—so much so that the U.S. Securities and Exchange Commission (SEC) took notice and took action.

U.S. public companies have to disclose their CEO pay ratio

This popular dissent has become a political issue and last month, the SEC announced regulation that requires public companies to disclose CEO pay ratios in their first annual reports filed after January 1, 2017. It may seem like a long way off, but like any financial reporting regulation, it could have an upstream effect that you may want to account for in plans and budgets.

How is it calculated?

The SEC has tightly defined what it wants companies to report; namely, the ratio of the CEO’s compensation to the median compensation of the employees, as shown in the diagram below. 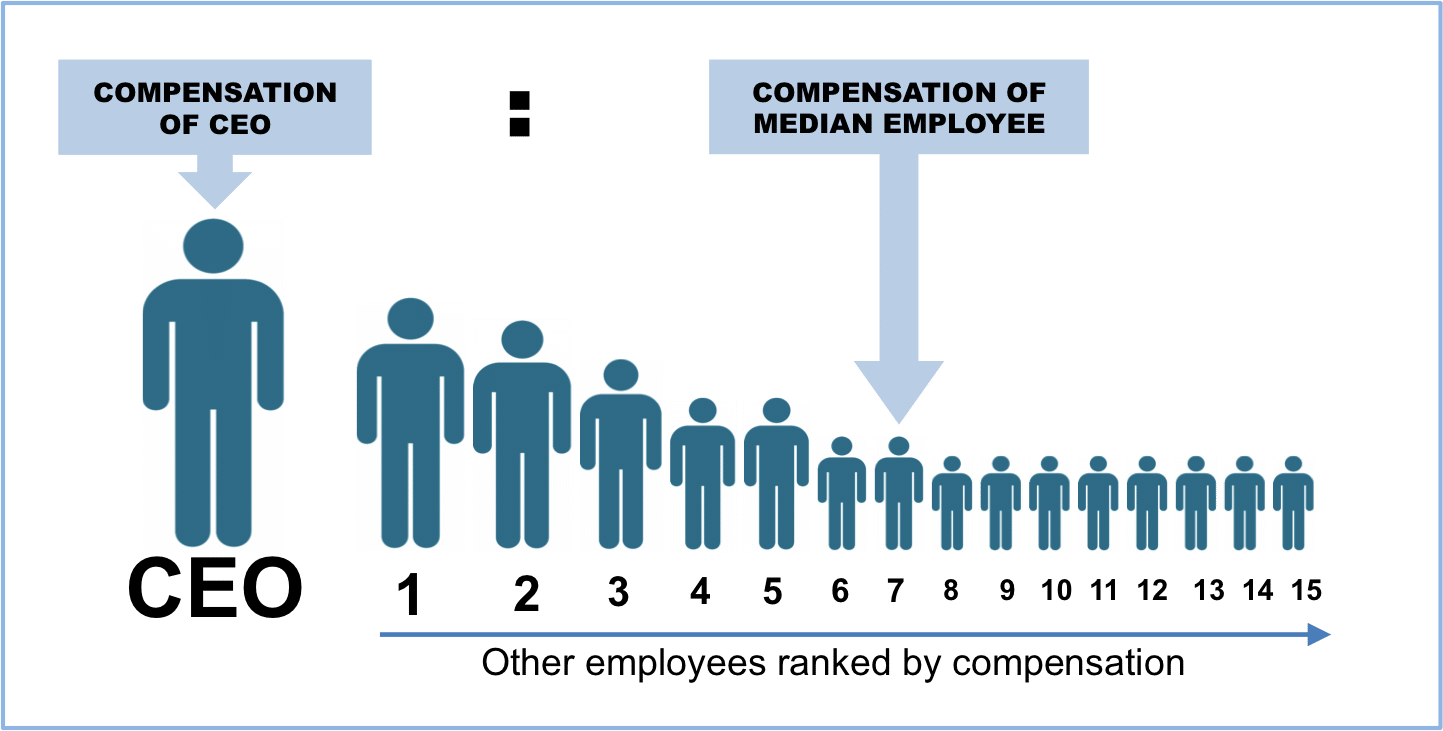 Diagrammatic representation of the basic principle

The new requirement is indeed a controversial piece of legislation. In fact, SEC chairwoman Mary Jo White has publicly said, ”To say that the views on the pay ratio disclosure requirement are divided is an obvious understatement,” and has disclosed that the commission received more than 287,000 comment letters on the matter. As a result, there have been some concessions. The SEC has subsequently given companies a fair amount of wiggle room in choosing the way they identified the median employee and that employee’s compensation. For instance:

The one thing you can be sure of is that most CEOs will be putting pressure on their CFOs to work through the SEC guidance and identify an allowable methodology that puts them in a favorable position—and they will be wanting to do it sooner rather than later. Alternatively, they can focus on increasing the compensation package of the “median employee”—great for hiking the CEO salary but with some serious impact on long-term operating expense.
Identifying the best path forward will likely require ad-hoc analysis, and many finance teams will automatically resort to spreadsheets. However, Anaplan’s cloud-based planning and modeling platform can help make the process easier and faster.

Like it or loathe it, the CEO pay ratio rule is certainly a controversial piece of legislation causing considerable concern in the upper echelons of U.S. businesses. Most public companies have about 18 months before having to publicly disclose CEOs’ pay. I would encourage you—right now—to consider how you want to address the challenge. If you are thinking of using spreadsheets, check out our pre-recorded webinar “7 reasons to replace spreadsheets now.”